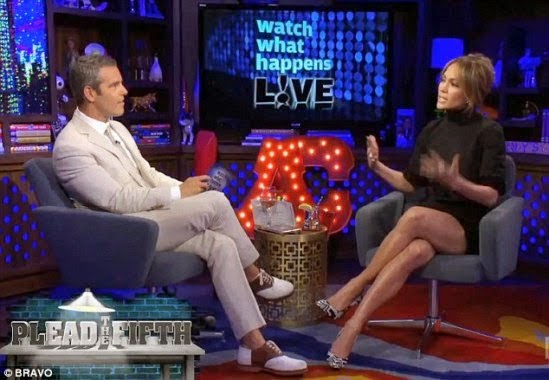 Award winning singer, Jennifer Lopez who as we all know has dated a few men in the entertainment industry, including dancers, a music exec, singers and actors. And of all the men she’s been with, she says dancers are better lovers than actors.

During an interview with Andy Cohen on Watch What Happens Live yesterday while promoting her new album A.K.A, Jennifer was amazingly truthful when the host asked her who were better in b*d, dancers, singers or actors.

‘Can I leave? Am I trapped in here? I’m gonna start having anxiety.’ Jennifer joked. Then she opened up “I have to say that in my limited experience, I would have to say anybody involved in music. So I would say singers and dancers. I forgot my card. D***t. I could’ve pleaded the fifth.’

“I’ve dated two dancers. One, I had a brief marriage with, Cris Judd, who is an amazing person and whom I love, and then Beau (Casper Smart), we just broke up, who I love as well. He’s a good friend.
Jennifer Lopez has also dated actor Ben Affleck, they dated from 2002 till January 2004.
–

Related Topics:a music execAward winning singerincluding dancersJennifer Lopez who as we all know has dated a few men in the entertainment industryshe says dancers are better lovers than actors.singers and actors. And of all the men she's been with
Up Next