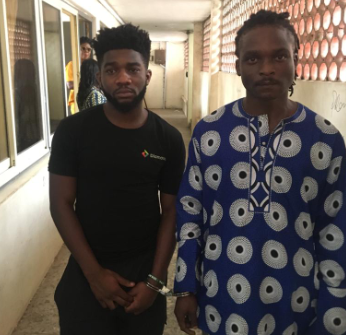 Nigerians have been on social media lashing at blogger, Linka Ikeji, for taking down a rape story she reported on her platform yesterday. The case involve  one Razaq Oluwaseun Oke(right), and Don-Chima George who were accused of luring  a girl to a hotel, unknown to the girl that they had ulterior motives. She was reportedly drugged before they took their turns to rape her.

The duo were also said to have filmed the rape session before they were rounded up by the police and the video was found on their phones.

Well, Nigerians have been on social media accusing not only the blogger of pulling down the post, the Nigerian Police Force have also not been left out. They are accusing the Police of releasing the accused and also deleting the video.

Fuck Linda Ikeji. Fuck Ricco. Fuck Don Chima. Fuck the Popo. All of them are mad. So she really deleted the post off her site? She is mad pic.twitter.com/42pJFjCtHD

So Linda Ikeji took down the story, a rape story…

I really want to know how much they paid Linda Ikeji to take down that post.

How much does her conscience and empathy cost?

2019: Avoid anything that could lead to crises – Jonathan begs politicians Reality TV star, Victoria Adeyele, better known as Vee, has shared new photos of herself on her social media pages. The former BBNaija ‘Lockdown’ housemate took to her Twitter page on Thursday to share a couple of photos.

“Be happy; it drives people crazy”

Information Nigeria recalls Vee and her love interest in the Big Brother house, Neo Akpofure, recently showered each other with romantic words.

Read Also: “I Don’t Think You’d Ever Lose Me, My Feelings For You Won’t Change” – Neo Promises Vee (Video)

In the video, Vee said to Neo:

“I don’t know how you do it. I don’t know you cope with me because I can be such a handful but I’m crazy about you, and I will always have your back.” Popular Nigerian singer, Wizkid has finally set an official release date for his long-awaited album, ‘Made In Lagos.’

The singer broke the news to his fans on his social media accounts on Thursday.

This comes hours after fans of the singer took to Twitter to express their disappointment after the singer failed to release the long-awaited album on Wednesday despite dropping hints.

Wizkid, who moved the released date of his debut effort a couple of times, is finally releasing it and his fans can’t wait.

The singer noted that the album which consists of 15 different songs will be dropped on the 29th of October at exactly 11:11 pm WAT.

It didn’t there as the ‘Smile’ crooner shared his tracklist. The tracklist of the album The 46-year-old filmmaker also bemoaned the disregard for culture in his speech.

“Desmond Elliot just destroyed all the precious child hood memories he gave us in movies ….”

See their tweets below: