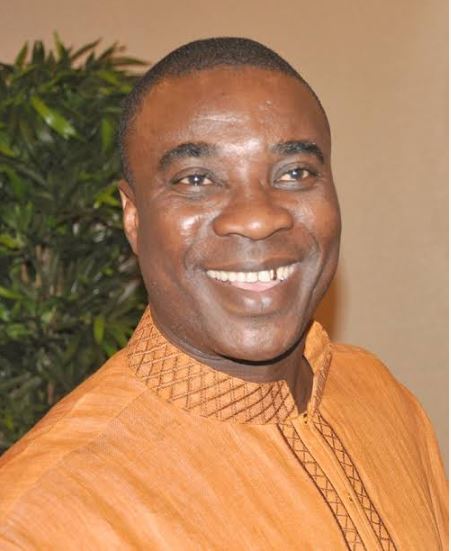 This is a house you would never ignore. Built and furnished with the best of interior designs, it is located in Ijebu Ode, Ogun State.
Intentioned to be a country home, the multi-million naira edifice which is very close to the Ijebu-Ode Stadium sits on a 1,800 square metres of land.
Popularly referred to as Ule Omo Ojusagbola, the mansion which King Of Fuji, Ayinde Marshall aka KWAM 1 lives, comprises of four buildings in one.
First, there is the main house which has about seven bedrooms – five bedrooms located upstairs and two other rooms downstairs with a dinning section coupled with three living rooms. Then, there is a state-of-the-art gym and a studio.
Initially, when it was built about four years ago, estate valuers estimated the cost of the architectural masterpiece to be about N100 million. 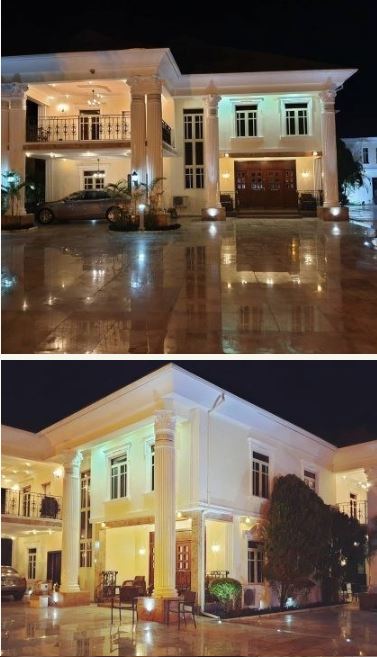 Also, the Fuji maestro must have added colour to the area. Little wonder, the street was in September 2018 renamed after his ancestral progenitor. So, the Ijebu Ode local government, renamed the former Liworo Avenue in G.R.A Ijebu Ode to ‘Omo Ojusagbola Avenue’.
The main house which is quite big is adorned by about six Graeco Roman designed huge pillars which are usually found in the mansions of the super-rich. The house is said to have quite a number of high grade bulletproof Swisstrade doors imported from Switzerland.
Well, in Ojushagbola, a nice ambience would welcome you at night. What more, the interior design and styling are fit for kings.It spells royalty and the owner has received quite a number of distinguished personalities in his abode. He has thrown three wedding parties for some of his children in the edifice.
Surprisingly, no woman lives in this mansion with KWAM1. 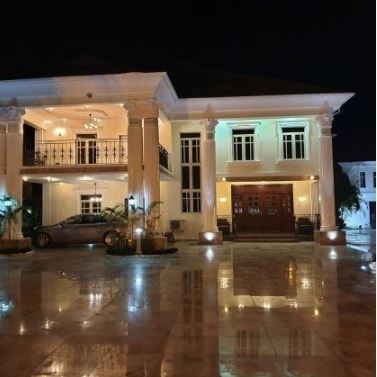 According to sources close to the Fuji King, he hardly lives with a woman. No diabolical insinuations here.
“KWAM 1 just loves his space to himself and would not want any woman to disturb or disrupt his activities. He loves his kids and care for them but he would rather have them stay with their mothers than living with him. Remember, he is a polygamist and having all his wmen and children in a place could be uncomfortable for him. He deals with his wives and kids the way he feels comfortable with and everyone is happy,” a source told Kemiashefonlovehaven exclusively.
Recall that the Fuji maestro married one of his wives, Titilope Marsha, legally in March 2018 on his 61st birthday at a private ceremony at his Ijebu mansion.
Unknown to many, Titi, who was once married to Tunde Bashua and left him before marrying K1, does not live in the Ule Ojushagbon.
“She lives with her parents in Lagos and visits Ijebu whenever her husband sends for her. There was a time he wanted to get an apartment for her on the Mainland but Titi refused. She would rather stay with her parents on the Island than live anywhere else. Alhaji (KWAM1) hardly allows Titi and her three kids in Ijebu but would rather send money for their upkeep. Though there are times she forces her way to be in Ijebu, K1 knows how to discharge her promptly.
“He is a very meticulous man, who is also a very good cook. Pay him a visit in Ijebu and he would be the one to cook delicious meals for you. He cannot stand his house to be in disarray especially with little kids around,” said a source to Kemiashefonlovehaven.
That he lives alone with other domestic staff is not new to some of his friends and fans, who believe he needs to operate like that for a successful career.
“The life of an entertainer cannot be check-mated by a woman. He could travel for many weeks and not be home. He could even leave home and not return until the next day. How many women would allow that? There was a time he lived with one of his wives but Alhaji was not comfortable with the idea and started living in hotels instead. These woman eventually packed out of the house. He is an entertainer, he needs to be free of the encumberances of marriage,” the source said.
Related Topics:
Up Next