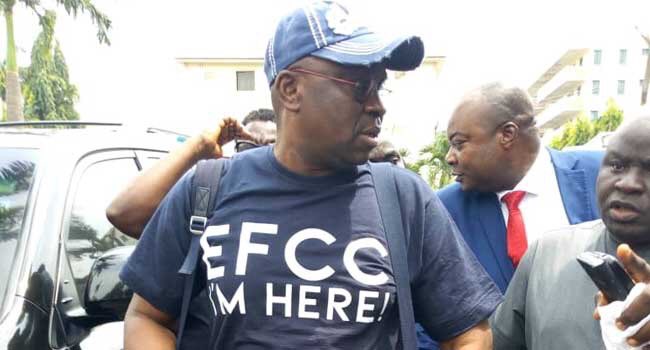 Immediate past governor of Ekiti state, Ayodele fayose was on Tuesday grilled by the Economic and Financial Crimes Commission(EFCC) after he voluntarily appeared at the commission’s office amidst fanfare.

However, the opposition Peoples Democratic Party(PDP) has accused the Presidency of directing the EFCC to incarcerate, Fayose indefinitely.

Here’s what Nigerians are saying

APC helped Kemi Adeosun to escape, Nothing has been done about Ganduje’s videos and he has also refused to resign. Ayodele Fayose surrendered himself to The EFCC for investigation. I don’t know how Federal Government is fighting this corruption.

Ayodele Fayose is detained for receiving money from Dasuki? same Dasuki that has not been tried or found guilty of anything. This system is too corrupt. What a movie.

@officialEFCC are you pretending not to have seen the Ganduje's Agbada dollarization video??

Oh Ayodele Fayose is your project, as approved by Buhari.
Leave Fayose alone or charge him to court if you have anything against him.