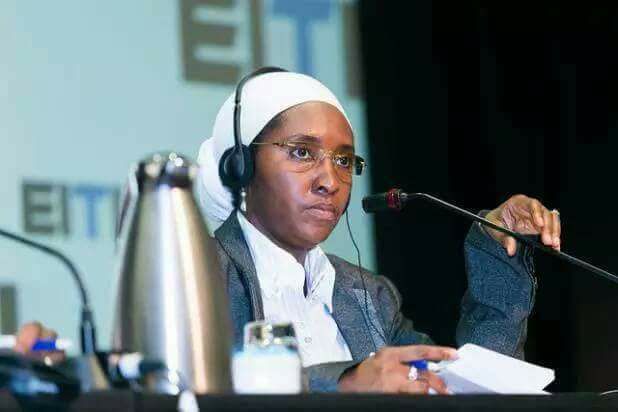 Although her appointment was received with mixed feelings as many have blasted the president for being too tribalistic. There were thosed that argued that the new acting Minister is ill fit for the position and that the appointment should have been for someone from the South.

However, Ahmed has resumed duty as acting Finance minister and as she arrived at the ministry today, here’s what she had to say:

These are very challenging times for our country. It means we are part of the economic team that has been charged with making sure there is economic stability in our country.

“We have very serious revenue challenges and it is up to us to shore up the revenues of this country.

“There are a lot of sacrifices that I know that you have done, and we are going to push ourselves to still do more so that at the end of the day we will say Alhamdulillah– glory be to God!

“The finance ministry has overtime been known to have very skilled personnel; from interacting with some of you, I know that there is a lot of skill set within the ministry, and that I am in good hands.

“I plan to work very closely with the whole of the directors, most especially with the permanent secretary.

“I want to declare that today the permanent secretary is my new next-of-kin. What that means is that I am going to work hand-in-gloves with him, and I expect everybody to do the same thing.

“There are some things I know about finance, but there is a lot that I don’t know; and the knowledge resides in you.”

Zainab Ahmed: Nigeria’s new acting Minister of Finance (Some things to know about her)

If APC sends Ambode away, we will gladly accept him – PDP