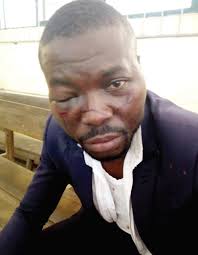 A Nigerian lawyer identified as Mr Bernard Oyabevwe, was allegedly beaten to a pulp by policemen attached to a police station in the ‘A’ Division of the Delta State Police Command in Warri for defending his client.

The lawyer was said to have visited the division to defend his client who was arrested by the operatives of the Economic and Financial Crimes Commission on June 5, 2018, on the fateful day.

Southern City News learnt reports that trouble started when Oyabevwe found out that his client and his wife had been forcefully arrested by the EFCC officials from Magistrate Court II and taken to the division. The lawyer was said to have gone to the division to ascertain why his clients were arrested.

While there, a source told Southern City News that policemen at the station threatened to kill the lawyer and whoever dared to intervene.

The source, who spoke on condition of annonymity, said one of the policemen pushed the lawyer against the EFCC vehicle that was conveying his client and his wife to unknown destination.

Other policemen were alleged to have held Oyabevwe and beat him to the point that he could no longer talk.

“He started bleeding and coughing out blood until some court officials from both the high and magistrate’s courts intervened and insisted that he should be rushed immediately for medical treatment,” the source said.

The assault on the lawyer was said to have been carried out by over ten policemen (names withheld) who were alleged to have used their guns to hit the victim’s eyes.

Oyabevwe, who confirmed the attack on him, accused the Divisional Police Officer of the station, Mr Kenneth Zuokumor, a Chief Superintendent of Police, of being behind his attack, saying that he lost mobile set and N50,000 cash in his pocket.

He stated that he was charged to court at the end of the melee in his bleeding condition on three count-charge of obstructing justice, threat to peace and attacking the station.

Meanwhile, the Warri branch of NBA has called on the Inspector-General of Police and the Police Service Commission to immediately probe the assault by police on its member.

Briefing journalists at a news conference in Warri on Sunday, the Chairman of the Warri NBA, Mr Godwin Ebowe, flanked by his deputy, Mr Kunle Edun, among others, demanded the dismissal of the police officers involved in the attack and the transfer of the DPO, Area Commander and the state Commissioner of Police for their alleged complicity in the attack.

Ebowe said, “We will not accept that as lawyers. We want the world to know that we are not going to sleep and allow this matter to be wished away or swept under the carpet. No amount of pleading, they must be brought to book. The policemen involved must be prosecuted before the relevant courts, while we take our civil action.”

However, the state Police Command denied the allegation, accusing Oyabevwe of assaulting a uniform police officer on duty.

The state Police Public Relations Officer, Mr. Andrew Aniamaka, said the lawyer had already been arraigned in court for obstructing officials of the EFCC by conducting himself in a manner that caused the breach of peace and assaulting a police officer.

“There is a matter that the EFCC is investigating for which some officials of the agency came to Delta State and the lawyer while trying to defend his client became violent and the EFCC could not contain him and, so, the matter somehow was brought to the station. And still, he would not reason with the policemen who were trying to control the situation,” he said.

Money Ritual: I ripped out my friend’s heart after killing him, as instructed by the native doctor