A 21-year-old South African lady, Zolile Khumalo, a student of the  Mangosuthu University of Technology, was in the early hours of Wednesday, shot dead by her boyfriend, inside her hostel room.

The ex boyfriend who is also a former student of the school, shot her dead after she called off their relationship. He shot her in front of her roommate.

According to reports, the ex-boyfriend gained access into her hostel by signing in using his friends name. Once he gained access, he asked his friend to go and knock on her door on his behalf. As soon as she opened the door, they got into an argument that ended up with him shooting her in front of a roommate.

The boyfriend has since been arrested and would soon be charged to court.

The school authority has released a statement reacting to the gruesome murder of one of its students. 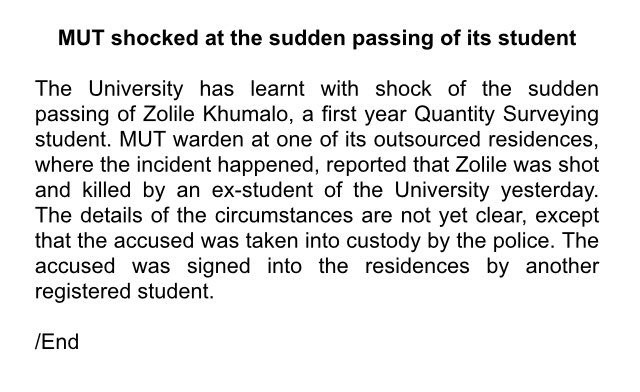