In the video, a couple of drunk wedding guests barged into the hotel room of a newly married couple just as the couple was getting intimate. The bride and groom looked shocked as two men broke into their room but it seemed they knew both men and they laughed with them but the guests proceeded to walk to the bed and began puling the duvet covering the bride’s almost naked body.

The bride and groom can be seen pushing the men off of them but they wouldn’t budge. After they suceeded in removing the duvet, they then made for her underwear and tried to pull her pant and bra. 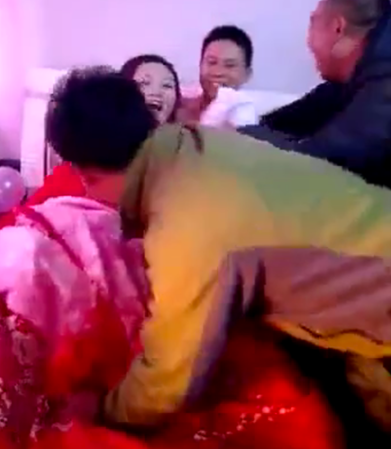 The video has caused outrage in China. Only two weeks ago, in the same China, a video went viral showing the intoxicated father of a groom forcing himself on his son’s new wife and kissing her in front of wedding guests (read here).

So people bring horses into clubs? Bikini clad lady thrown off while riding a horse inside a crowded club (video)