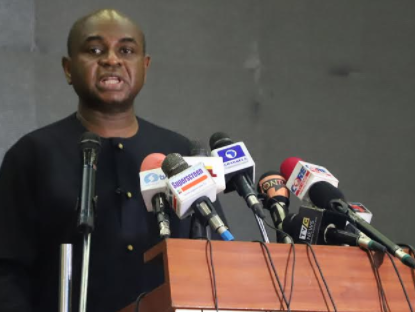 Nigeria’s 2019 elections is definitely going to be one of the most interesting elections in Nigeria’s history. As new faces begin to declare their intention to unseat old politicians, it looks like the old politicians would have a lot to contend with. Fela Durotoye, a leadership coach and consulting guru was the first of the newbies to show interest in running for president and another young Nigerian, Adamu Garba, an IT expert came shortly after, next on the line is former Central Bank of Nigeria CBN, Deputy Governor, Prof. Kingsley Moghalu. Here are 8 things you should know about him;

1His full name is Kingsley Chiedu Moghalu, a political economist, lawyer and former United Nations official, who is a Professor of Practice in International Business and Public Policy at The Fletcher School of Law and Diplomacy at Tufts University.

3.His tenure as Deputy governor at CBN didn’t go without controversy as he was charged with executing frequently controversial banking sector reforms spearheaded by CBN Governor Sanusi Lamido Sanusi in a fraught political and social milieu, and was seen by some observers as the heir apparent to succeed Sanusi as governor.

4.Moghalu is a frequent and sought-after speaker at global forums. He gave the 2014 Thomas Hodgkin Lecture at Oxford University, and has been a keynote speaker and panelist at the Federal Reserve Bank of the United States, the South African Reserve Bank, and many other international forums.

5.Moghalu was born in Lagos in 1963 to Isaac Moghalu, a Nigerian Foreign Service Officer in the Ministry of Foreign Affairs, and Mrs. Vidah Moghalu. His father, Isaac Moghalu was posted abroad as a Nigerian diplomat in Geneva, Switzerland very shortly after his birth, and subsequently served in Washington D.C. as well. Moghalu spent his early childhood in Geneva and Washington where his family lived in the 1960s.

7.Umaru Yar’Adua, President of the Federal Republic of Nigeria (2007–2010) appointed Moghalu Deputy Governor of the Central Bank of Nigeria in November 2009 following his confirmation by the Nigerian Senate.

8.He married to Maryanne Onyinyechi Moghalu, in 1994, they have four children.

Advice Column: Should I Do it to help my parents with the rent?

Today’s Question: What do you think of Wizkid Getting Himself a Goat as a pet?