Sonia Ogbonna, the lovely wife of actor IK Ogbonna, shared a beautiful photo of her in a bikini by the pool and a follower decided to criticize her.

The follower thought it inappropriate for her, as a married woman, to expose her body that way and said as much in the comment section. But Sonia, who in an earlier post warned people not to write her “a moral epistle in comment section about inappropriate beach dress code” gave the woman the attention she was looking for. 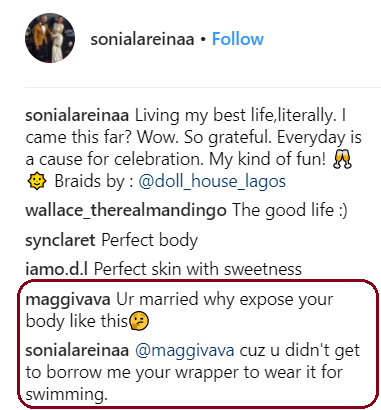 Sonia’s followers also went in on the woman and told her to mind her business.