The Lagos State Police Command confirmed the arrest of a man identified as Lateef Nurudeen, the suspect was allegedly robbing people while thousands of Nigerians were singing and praising God at the Tafawa Balewa Square, Lagos State, during the House on the Rock’s sponsored gospel concert, ‘The Experience,’.

According to the police, Nurudeen, who pretended to be a worshipper, was arrested with seven mobile phones belonging to some participants at the event.

The 19-year-old, who was said to be in company with six other persons, was arrested by men of the Rapid Response Squad of the Lagos State Police Command with a bag where the stolen phones were found.

He was also said to be in possession of charms.

The police on Tuesday said the suspect, who lived on Obadina Street, Lagos Island, was arrested around 12.45am at the venue of the concert.

“The suspect, on interception by the officers posted to the venue of the concert, said he was a barber. After further scrutiny, he claimed that he saw the bag underneath a flower bed.

“Found inside the bag were seven different mobile phones, charms and a purse. The purse contained an identity card and an ATM card belonging to one Chris Chinedu.

“The suspect also confessed to be the owner of the charms in the bag,” a source in the RRS said.

The police said four of the phone owners had shown up at the RRS headquarters in Alausa, Ikeja.

The owners, identified as Ukwajiba Felix, Ekhorelen Ruth, Kpanou Estelle and Kemi Ahmed, were said to have been alerted after operatives of the RRS called some of the contacts on the phones.

“The owners, who had been looking for their mobile phones before leaving the venue of the programme, said they didn’t know when their phones were removed from their bags and pockets.

“One of them, Ukwajiuba (Felix), said immediately he realised that his phone had been stolen, he reported the theft at the Zone 2 Police Command, Onikan, Lagos,” the police said.

Nurudeen, whom the police alleged was an ex-convict, reportedly said in his statement that the charms in the bag were for his protection.

He said he was at the concert to pray and found the bag on a flower bed.

His statement read in part, “I pray a lot. The charms are for my personal protection. They have been with me for ages. They were specially prepared for my protection against evil. I went to the crusade to pray.

“My friends who took to their heels when police started questioning me are troublemakers. They were at the programme to cause commotion. That is what they do and how they make a living.

“I am a troublemaker too, but I went to that programme to pray and not to steal. My friends ran because they knew I would be arrested. I pray a lot and that was why I was at the programme.”

The police said efforts were ongoing to track the suspect’s accomplices, adding that they had abandoned their hideouts.

The state Commissioner of Police, Edgal Imohimi, was said to have directed that the case be transferred to the State Criminal Investigation and Intelligence Department, while efforts should be intensified to arrest the accomplices.

He also ordered that the stolen phones should be released to their owners after providing evidence of ownership.

Related Topics:phone theft
Up Next

Lawyer arraigned for assaulting her maid

How Jailbreaks In Edo, Ondo Happened Jailbreaks and vandalization of properties were during the week reported in some parts of the country due to the civil unrest that has enveloped the entire country.

The first prison break recorded during the week was in Edo State.

Information Nigeria understands that some hoodlums broke into Benin prison, popularly called the White House during the #EndSARS protest in the state.

The federal government said that a total of 1,993 inmates in legal custody were freed as a result of the jailbreak in Benin city and Oko.

This was disclosed in a statement issued by the ministry’s director, press and public relations, Mohammed Manga on Tuesday.

Nigerians, however, have taken to Twitter and other social media platforms, to express shock at the jail break in Edo. Reports making the rounds suggest that hoodlums or #ENDSARS protesters were responsible for their release.

Nigerians think this is an inside connivance on the part of prison officials, as an effort for the government to release military men to restore order in the country and stop the protest forcefully. 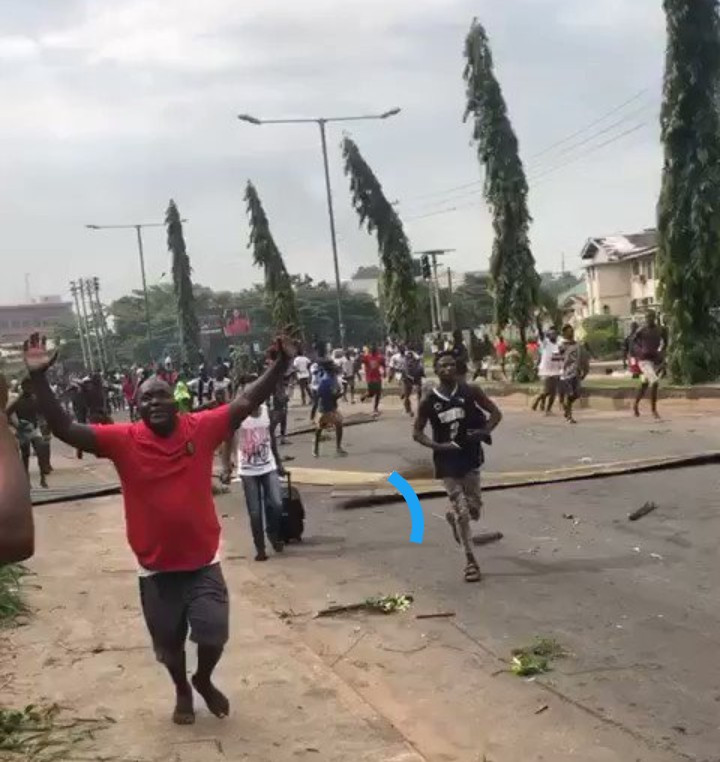 It is against this background that the state governor, Godwin Obaseki, swiftly imposed a 24-hour curfew on the state.

In a similar event that played out, jailbreak occurred in Ondo state on Thursday, October 22.

Not less than 58 inmates at the National Correctional Service Centre in Okitipupa, Ondo State escaped during the prison break.

This came after a 24-hour curfew was put in place by Ondo State Governor Rotimi Akeredolu.

Information Nigeria gathered that scores of hoodlums defied the 24-hour curfew on Thursday to break into the centre and set the inmates free.

In another related incident, angry youths attacked the Ikoyi Correctional Centre on Thursday and set the place on fire during an attempted jailbreak.

A video circulating online showed smoke coming from parts of the facility.

It was, however, learnt that security operatives arrived at the correctional facility and they foiled the attempted jailbreak.

This is a season of prison break in Nigeria. Do you think the nationwide endSARS protest has anything to do with these incidents?