Melanie Martinez is being accused of rape by an upcoming female singer who is also her fan and friend.

Former Dresses musician Timothy Heller accused The Voice star of rape on Monday, and within 24 hours, Martinez tweeted a response to Heller’s accusation, explaining that there was something between them but it wasn’t rape. Heller wrote in part: “I have kept this secret for years, convincing myself that it wasn’t a big deal and I wasn’t hurt by it. The thought of accepting that my best friend raped me seems insane.” 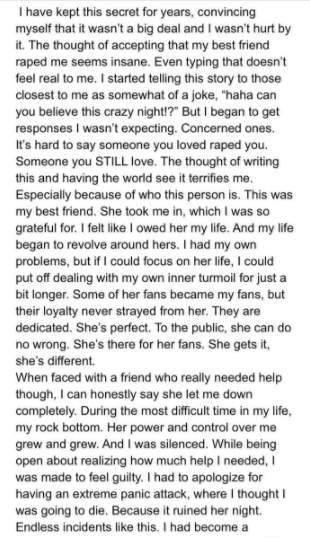 She said Martinez pressured her into sexual contact on June 25, 2015. She also said Martinez pried for information on her sexual preferences and suggested they play a flirtatious game with handcuffs. “I was laughing along at first,” Heller said. “But Melanie was so serious.”

In her tweet, Heller wrote, “[Martinez] began bartering with me, […] talking about the appearance of my boobs and begg[ing] to JUST touch them.” 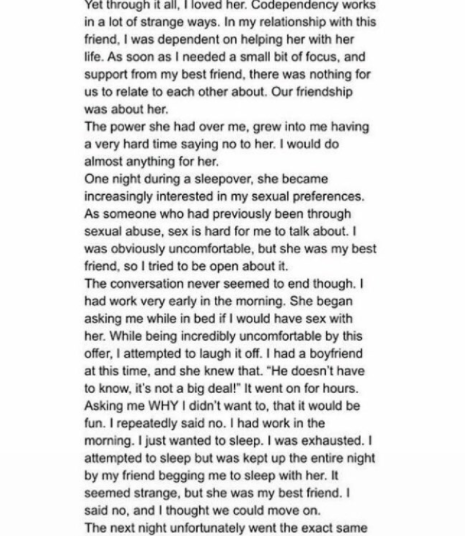 Eventually, after hours of allegedly coercing Heller into sex, Heller said Martinez performed oral sex on her and violated her with a sex toy, all while she “lay still, in shock, completely not reciprocating.” 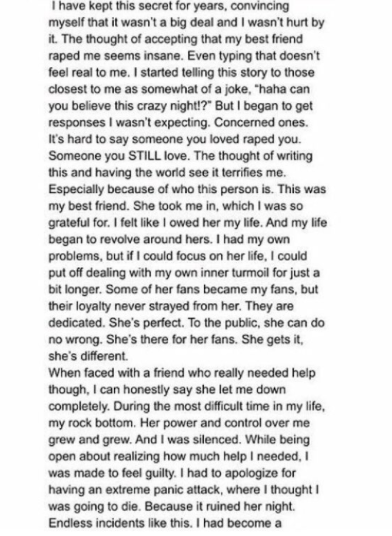 In reply, Martinez wrote: “(Heller) never said no to what we chose to do together.”

This means Martinez is not denying being intimate with Heller, she’s simply saying it was consensual.

The accusation has led to a debate on Twitter with more accusations, counter-accusations, and people dropping screenshots to prove their point, thereby making it hard to know what’s really true. What we know from all of this is that Heller and Martinez have been friends from as far back as 2014, before Martinez became this popular. Both of them are into the music industry but Martinez is now the big name. Both women had sex: Heller says she was forced by Martinez and kept saying no only to finally give in because she felt pressured, while Martinez says it was consensual. Heller tries to mimic Martinez as can be seen in her Instagram photos; she sometimes wears a two-colored hair like Martinez and poses like her, it’s clear she’s a fan. 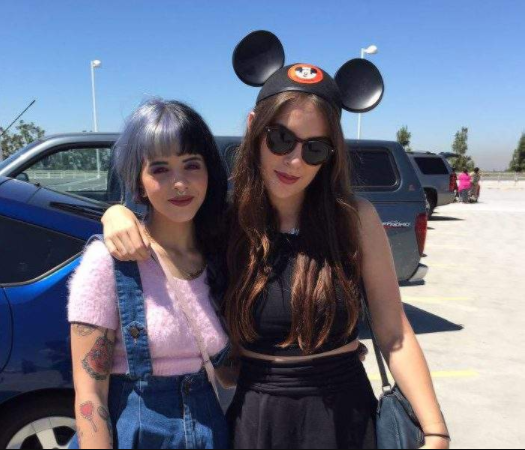 Some people are calling Heller out for being jealous of Martinez’s success and trying to use her to make her own music popular. Some have called Heller out for promoting her music on her Twitter account one day after she brought attention to her account by accusing Martinez of rape.

Heller insists she was raped. Martinez insists it was consensual sex. Meanwhile, another woman named Madeleine has given Heller her support and is also claiming Martinez pressured her into sleeping with her and she finally gave in. Also, Joshua Goodson, a friend of Heller, wrote a statement supporting Heller’s claims and insisting that Martinez raped her. 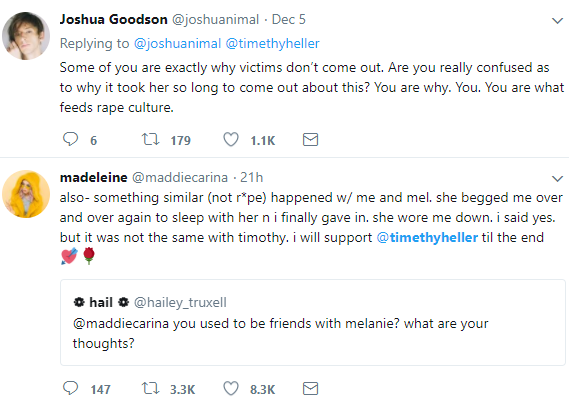 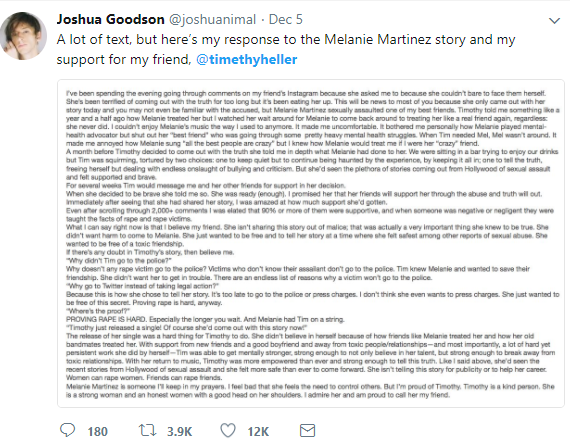 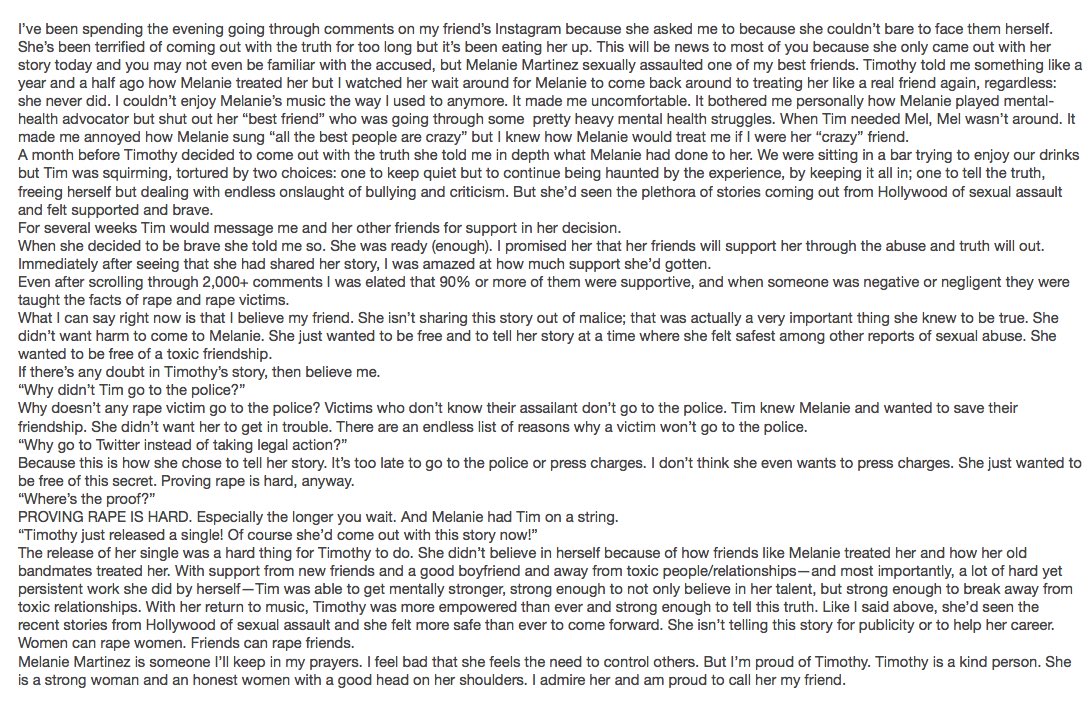 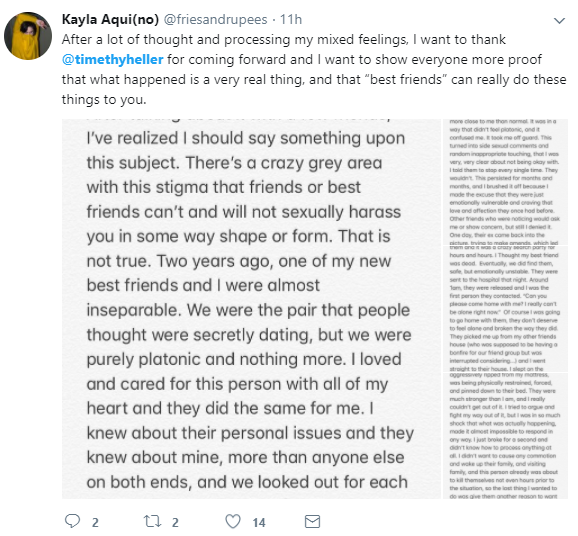 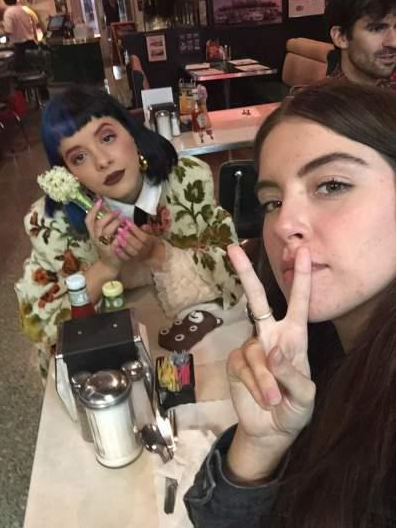