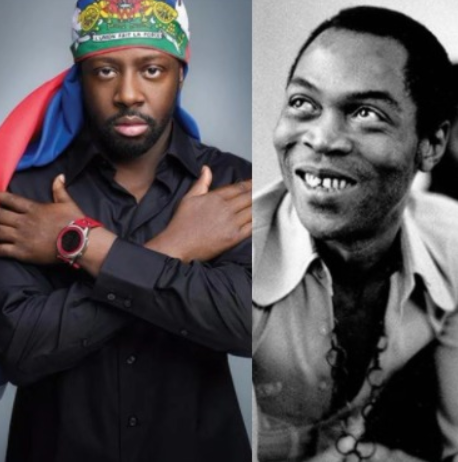 The song is off his 8th studio album ‘Carnival III: The Fall and Rise of a Refugee’ however, its a mediocre depiction of a so called ‘tribute’ to the late African music legend.

Wyclef in a recent interview about the Fela Kuti track, said he wanted young people to know about the legend, unfortunately he was unable to portray that in the 4-minute song.

‘I decided to name it Fela Kuti because for me, I feel like we be thinking of [Bob] Marley, we give a lot of people from our past props, so when the kids hear Fela Kuti, I really want them to Google it. ‘For me, the same way kids can have songs called ‘Wyclef Jean’ who are influenced by me, I want kids to know who Fela is and what he means’, Wyclef said.

Apart from the beat, nothing else comes close to the likeness of Fela.

Wyclef only mentioned Fela’s name once in the song with a line that says, ‘dance like Fela’ and no one in the video could even replicate the famous ‘Abami Eda’s’ dance step.

A Nigerian on twitter @theySayYo has also gone off on Wyclef for the lacklustre song with a series of tweets;

Three days after I watch @wyclef‘s #FelaKuti video on YouTube, I still wonder why Nigerians are not talking about it.

But, I feel so sad with @wyclef‘s disrespectful music video of #FelaKuti. Wyclef Jean failed at everything in the video

Hence, I won’t consider @wyclef‘s #FelaKuti music video a tribute to the afrobeat pioneer! And I won’t allow you rubbish #FelaKuti brand

The lyrics of @wyclef have nothing to do with #FelaKuti, except from the “Dance like Fela Kuti”

In @wyclef‘s interview about #FelaKuti track, he said you wanted d young people to know about d legend, but, u were unable to portray that!

Note, I appreciate @wyclef‘s drive and it was so thoughtful of him to remember #FelaKuti, but he deserves better from you

In case you need to see the video, below or here