Connect with us
Thousands of women filled the streets of several major U.S. cities on Saturday in an unprecedented wave of mass protests against President Donald Trump the day after his inauguration.

Women activists, galvanised by Trump campaign rhetoric and behaviour they found to be strongly prejudiced against women, spearheaded scores of U.S. marches and sympathy rallies around the world that organisers said drew nearly 5 million protesters in all.

The demonstrations, far surpassing crowd expectations, highlighted strong discontent over Trump’s comments and policy positions toward a wide range of groups, including Mexican immigrants, Muslims, the disabled and environmentalists.

The planned centerpiece of the protests, a Women’s March on Washington, appeared to draw larger crowds than turned out a day earlier to witness Trump’s swearing-in on the steps of the U.S. Capitol.

No official estimates of the turnout were available, but it clearly exceeded the 200,000 marchers projected in advance by organisers, filling long stretches of downtown Washington around the White House and the National Mall.

Many wore knitted pink cat-eared “pussy hats,” an appropriated reference to Trump’s boast in a 2005 video made public weeks before the election about grabbing womens’ genitals. 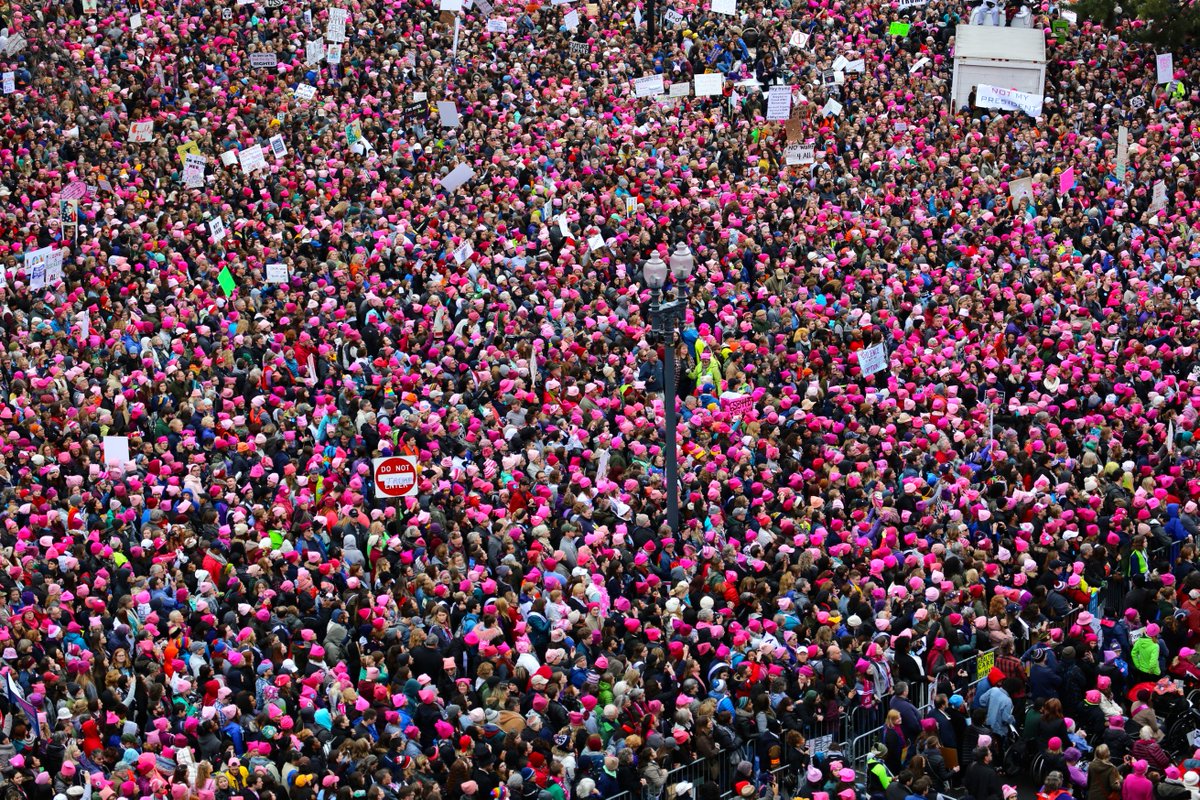 So-called Sister March organisers estimated 750,000 demonstrators swarmed the streets of Los Angeles, one of the largest of Saturday’s gatherings. Police said the turnout there was as big or bigger than a 2006 pro-immigration march that drew 500,000.

Some 400,000 marchers assembled in New York City, according to Mayor Bill de Blasio, though organisers put the number there at 600,000.

The Chicago event grew so large that organisers staged a rally rather than trying to parade through the city. Police said more than 125,000 people attended there; sponsors estimated the crowd at 200,000.

The protests, mostly peaceful, illustrated the depth of division in the country, still reeling from the bitterly fought 2016 election campaign. Trump stunned the world by defeating Democrat Hillary Clinton, a former secretary of state and first lady who made history as the first woman nominated for president by a major U.S. political party.

Pam Foyster, a resident of Ridgway, Colorado, said the atmosphere in Washington reminded her of mass protests during the 1960s and ’70s against the Vietnam War and in favor of civil rights and women’s rights.

“I’m 58 years old, and I can’t believe we are having to do this again,” Foyster said.

Although Republicans now control the White House and both houses of Congress, Trump faces entrenched opposition from wide segments of the public, in contrast with the honeymoon period new presidents typically experience when first taking office.

A recent ABC News/Washington Post poll found Trump had the lowest favorability rating of any incoming U.S. president since the 1970s.