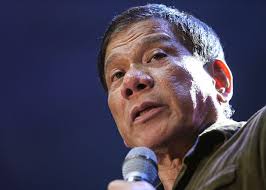 Philippine President Rodrigo Duterte on Tuesday said he regrets comments aimed at U.S. President Barack Obama, which led to a cancellation of their meeting.

The meeting between Obama and Duterte was rescheduled and will not occur this week while the two leaders are in Laos for the Association of Southeast Asian Nations summit.

A statement from Manila’s Malacanang Palace said the meeting “has been mutually agreed upon to be moved to a later date.”

The decision comes after a rant Monday by Duterte, who was critical of potential conflict with Obama. The United States then decided the meeting planned for Tuesday wouldn’t be productive.

Duterte’s office said his comment were not meant to be a personal attack against Obama.

Prior to traveling to Laos on Monday, Duterte, expecting criticism from Obama over the Philippines’ new war on drugs in which more than 1,900 people have thus far died, bluntly answered a press question by saying “I am a president of a sovereign state and we have long ceased to be a colony.”

“I do not have any master except the Filipino people, nobody but nobody. You must be respectful. Do not just throw questions. Putang ina I will swear at you in that forum,” he said, using the Tagalog phrase for “son of a bitch.”

Obama, in Hangzhou, China, for the G20 summit, responded, “Obviously the Filipino people are some of our closest friends and allies and the Philippines is a treaty ally of ours, but I always want to make sure that if I’m having a meeting that it’s actually productive and we’re getting something done.”

On Tuesday, Duterte admitted that “While the immediate cause [of the controversy] was my strong comments to certain press questions that elicited concern and distress, we also regret it came across as a personal attack on the U.S. president.”

A date for the rescheduled meeting was not announced.

5 Reasons On-line Dating Is Not Always The Best