Martin Castrogiovanni, a famous French rugby player opted out from playing an important champions cup semi- final game claiming he needed to travel to Argentina to take care of a family emergency. His boss believed him and gave him permission, but to the surprise of many, a photo of Martin and his famous pal Zlatan Ibrahimovic having a nice time in Vegas hit the internet. He actually went to Vegas for Zlatan’s pool party and not to Argentina as he initially claimed. 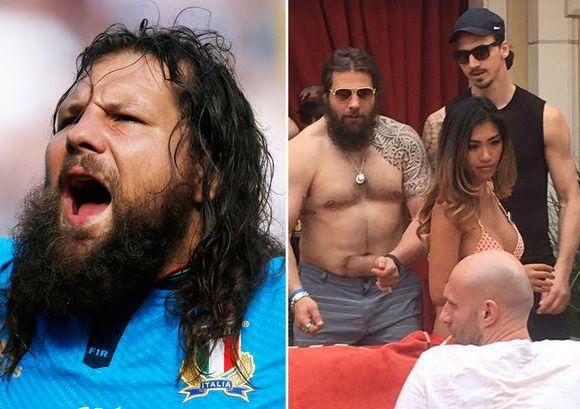 Ever get busted calling in sick to work — when you really went to Vegas instead???

That’s EXACTLY what happened to a famous rugby player this weekend … when he decided to rage with international soccer star Zlatan Ibrahimovic  after he told his squad he was taking care of family in Argentina.

The alleged faker is the pudgy tattooed guy in Zlatan’s Vegas party crew — his name is Martin Castrogiovanni and he plays for the famous French rugby squad, Racing 92.

Martin reportedly told his bosses that he needed to miss the VERY important Champions Cup semi-final game because he needed to attend to a family emergency in Argentina.
Problem is … Zlatan is internationally famous and paparazzi pics of Ibrahimovic’s pool party got back to France.
OOOPS.

Now, Martin has reportedly been suspended while the team investigates.
HOPE IT WAS WORTH IT!!!!