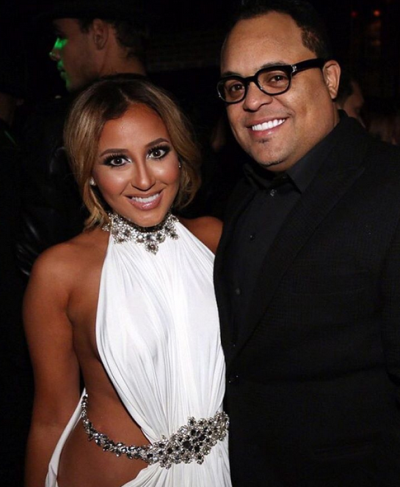 Recently divorced gospel singer Israel Houghton was spotted on a romant!c getaway with talk show host Adrienne Bailon this week, sparking rumors Adrienne may have caused his divorce. Israel says this is not true. Read what he wrote below……… 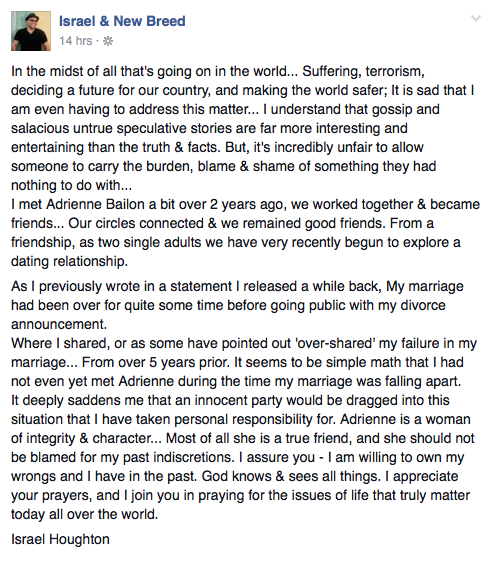 Related Topics:Cheating On His Wife With Adrienne BailondeniesIsrael HoughtonRecently divorced gospel singer Israel Houghton was spotted on a romant!c getaway with talk show host Adrienne Bailon this weeksparking rumors Adrienne may have caused his divorce. Israel says this is not true. straight...Read what he wrote below.........
Up Next

READ The Words Of Wisdom Patoranking Dropped On Instagram A prison along Sapele Road in Benin City, the Edo State capital, today, Monday October 19th has been attacked by thugs. Watch clips from the scene below:

Benin protesters releasing prisoners from the station🤦‍♀️🤦‍♀️🤦‍♀️ This isn’t the way to go now😤 I strongly recommend the government to take actions in Benin😤#EndPoliceBrutality #Protesters #EndPoliceBrutalityinNigera #Beninprotest #EndSARS #EndBadGoveranceInNigeria pic.twitter.com/rz1sT3TZmd Decentralized international activist/hacktivist collective/movement Anonymous that is widely known for its various cyber attacks against several governments, government institutions and government agencies, corporations is currently the talk of social media

Airtel users in Nigeria woke up to see airtime worth of 1000 naira in their accounts, and many have already assumed that “anonymous” hacked airtel.

Reports gathered that the hacker who is yet to be identified, allegedly credited accounts of Airtel users with N1,000 each.

Yesterday, it was also reported that anonymous allegedly infiltrated DSTV and GOTV channels, providing users all the channels for free. DSTV was later able to recover its channels. At the moment, some Airtel subscribers have confirmed that they actually received the airtime. However, it’s still uncertain if it was actually hacked or if Airtel compensated its customers with the airtime.

Yeaterday Dstv channels were all showing free, my neighbor confirmed hers but my case was different.

Now this morning Airtel is giving free airtime, my mum and younger sister have gotten theirs, still my case is different. Who did I offend?😭😭

You see why we must #EndSARS

Gtbank is sending 5k to all (current) accounts.

Dm me your network provider and number immediately.

Meanwhile Airtel is giving 1k free airtime 😁😁😁. Kindly use it for data.#EndSARSImmediately

Online protesters, use the free 1k airtime Airtel gave you to subscribe. Let’s get to work!
Drop your #EndSARS comment and RT. #EndPoliceBrutalityinNigera pic.twitter.com/XNXtev2Wbu Kiki Mordi, Nigerian investigative journalist, had knocked music entertainer, Deji Banjo, aka D’banj for always having a reason to bring the death of his son on every conversation. D’banj lost his son, Daniel Oyebanjo III, on June 25th, 2019 to a tragic domestic accident at his residence in Lagos. The one-year-old was playing around a swimming pool when he fell in and drowned.

In a recent tweet, the singer lent a voice to the ongoing protest against police brutality as he expressed an understanding of the feeling of losing a child.

He wrote, “I know what it means to be in pain,to lose a child and a loved one..so I know the pain my brothers and sisters are going through and my heart is heavy . I pray God grants us the healing and restoration we so deeply need in our country and that our light can once again shine.” In reaction, Kiki Mordi shunned the Koko master against using the loss of his son as emotional blackmail.

“Everyday you use your child to emotionally blackmail Nigerians. You’re very scary,” She wrote.