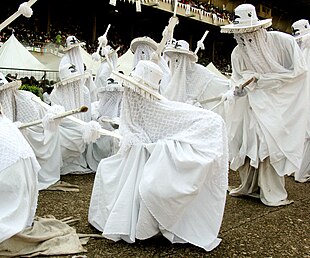 – The term Yoruba (or Yariba) did not come into use until the nineteenth century, and was originally confined to subjects of the Oyo Empire. The word “Yoruba” was first recorded in reference to the Oyo Empire in a treatise written by the 16th-century Songhai scholar Ahmed Baba.

– According to the CIA World Factbook report of 2013, the Yorùbá constitute over 40 million people in total; the majority of this population is from Nigeria and make up 21% of its population.

– The Yoruba are among the most urbanized people in Africa because centuries before the arrival of the British colonial administration, most Yoruba already lived in well structured urban centers organized around powerful city-states (Ìlú) centered around the residence of the Oba.

– The Yoruba are a very expressive people who celebrate major events with colorful festivals and celebration. From  Wedding ceremonies (Ìgbéyàwó), Naming ceremonies (Ìsomolórúko), Funerals (Ìsìnkú), to Housewarming (Ìsílé), the rich, pomp and ceremonial nature of their culture is undeniable.

– Yoruba drums typically belong to four major families. The Dùndún/Gángan family (the most common) imitate the sound of Yoruba speech,  the Sakara family are typically played in a ceremonial role in royal settings, weddings and Oriki (praise singing). The Gbedu family (literally, “large drum”) is used by secret fraternities such as the Ogboni and royal courts and the Ogido is a cousin of the Gbedu.

– The Yoruba have legendary types of clothes from processed cotton by traditional weavers. The most basic being the Aṣo-Oke, which is a hand loomed cloth of different patterns and colors sewn into various styles.