The six-year-old boy whose name has been withheld, died on Saturday at the Dong Nai Children’s Hospital, Vietnam.
Although Police in the southern province of Dong Nai, on Monday, November 30, said the little boy died after being inside a car for too long, his parents insists their child was sexually abused before his death.

“Our autopsy has found that the cause of death was suffocation,” Colonel Nguyen Van Tho, spokesperson of the provincial police department, told local media. 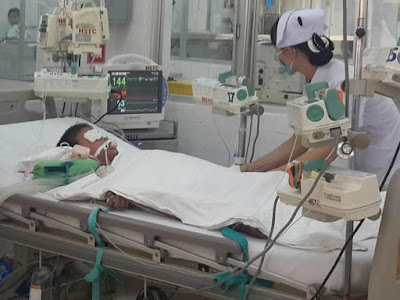 The boy’s father, Nguyen Van Vu, said he and his wife were working at a carpentry workshop in Trang Bom District on Friday afternoon when they realized that their little boy had gone missing.

As they were walking around looking for their child, a strange man appeared from a roadside coffee shop. He then approached his car and carried the boy out from the vehicle, Vu said. The boy was naked and unconscious at the time.

Vu and his wife rushed their child to a nearby hospital, and then transferred the boy to the Dong Nai Children’s Hospital in serious condition.
“I heard some of the doctors discuss… and they said my son might have been raped,” Vu told Tuoi Tre newspaper. “When I held him, I saw bruises,” he added.
Vu said the stranger man, who has been identified by the police, gave his family VND2 million (US$89), to pay the medical costs.
The father said the stranger claimed that the boy had got into his car without his knowledge and accidentally locked the car. But Vu said he was not satisfied with both the stranger’s explanation and the investigators’ conclusion.
“My boy was very shy, so I don’t believe he opened the car and got in,” Vu said.
Vu said his family was too poor to send their son to school, so they let him play at the workshop.

The stranger is believed to have come to the workshop several times to buy its products. He has been interrogated by the Police.