Pedophiles have been hiding behind the anonymity of the internet for years – but unfortunately, it seems that some teens and tweens think their parents’ warnings about the dangers of speaking to strangers online are just unwarranted overreactions. 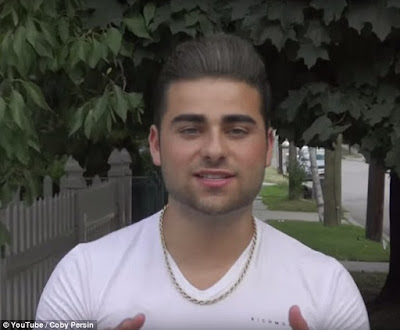 YouTube star, 21 year old Coby Persin, set out to help some New York-area parents teach their children how real the threat of pedophiles, rapists, and abductors truly is, posing as a teen himself and luring their young daughters into potentially dangerous situations by first striking up conversations with them on Facebook.

‘How easy is it for a pedophile to pick up an underage child using social media?’ he asks in a new video, quickly proving that it’s not very difficult at all. 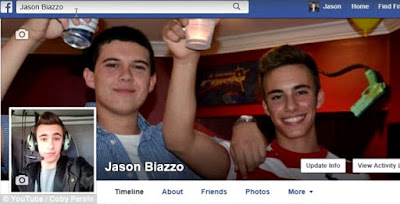 ‘I made a fake profile on Facebook posing as a 15-year-old boy,’ Coby explains, showing off a page for a made-up teen named Jason Biazzio. ‘With their parents’ permission, I friend-requested three girls ages 14, 13, and 12.’

Coby didn’t have to work hard to set the groundwork for a first meeting with any of these young ladies, merely chatting with them online or via text for three or four days before arranging to meet up at their homes or somewhere nearby. 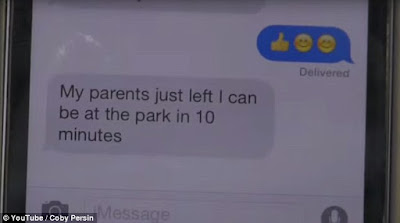 ‘What we found in this video is shocking and something everyone should see,’ he says.

The first girl he puts to the test is named Mikayla. Mikayla proves very trusting, and quickly takes ‘Jason’s’ word for it that he is another local kid – though the two have obviously never met before and have no friends in common. 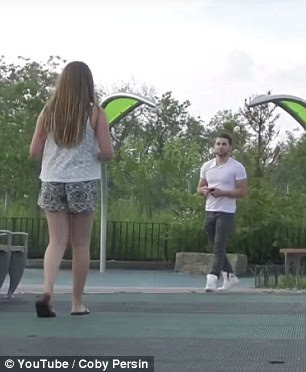 After he sends her a friend request, the 13-year-old asks where she knows him from.
‘I just moved from Florida to your town,’ he says with a smiley-face emoji. Coby doesn’t even have to specifically name her town for her to decide that he is safe.

‘Jason’ says that he just wants to make new friends, and the two continue to talk before arranging to meet in a park near Mikayla’s house.

After waiting for her parents to leave the house so she won’t have to tell them where she’s going, Mikayla sneaks out and walks to the park. When she gets there, she sees Coby – a muscular man with facial hair – waiting. He calls out to her and she asks who he is before her dad comes out from his hiding place, screaming.

The young teen, clearly shaken, quietly apologizes. Coby points out that they’ve only been talking to each other for a few days, and for all she knew, he could have been anymore.

‘Do you realize how scary this could have been?’ Mikayla’s stressed-out dad says before kissing her on the head and telling her that they ‘need to talk’.

The next girl that Coby befriends online is 12-year-old Julianna. When he asks her on Facebook if she wants to hang out, she says yes – but it would have to be when her dad isn’t around because she can’t have boys over. So the pair make plans for ‘Jason’ to come over when her dad is asleep.

The night Jason is set to visit Juliana, Coby and her father, John, discuss the young girl’s behavior. John doubts that Julianna will open up when they come knocking – or at least, he ‘prays she doesn’t’.
The two go together to the front of the house and Julianna, who barely comes up to Coby’s chest, does in fact open the door – much to her dad’s fury.

‘What’s wrong with you?’ John says angrily, taking his daughter by the arms. She immediately begins crying and apologizing as he continues to lecture: ‘How can you do this? You’re 12 years old!

‘You could have been raped and murdered!’ he yells. ‘I already lost your mother! What would I do if something happened to you?’ 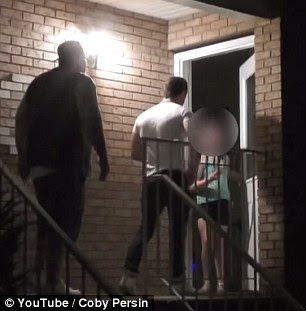 As Julianna continues to bawl, her father embraces her and says: ‘I love you. Don’t you ever do this again!’
Coby did the same with a 14 year old. Watch the whole experiment in the video below: