A disabled grandmother killed alongside her husband by their debt-ridden son made a desperate 999 call begging for help – but the emergency operator did not transfer the call because her voice was ‘too muffled’.

Former bouncer Martin Ruddy, 29, beat father Eric, 64, to death with a brick then strangled mother Carol, 54, with a television cable to get his hands on their £90,000 savings. Amid the brutal attack at their home in Elswick, Newcastle, on December 12 2014, Mrs Ruddy managed to dial 999, but her son cut the call off after three seconds. 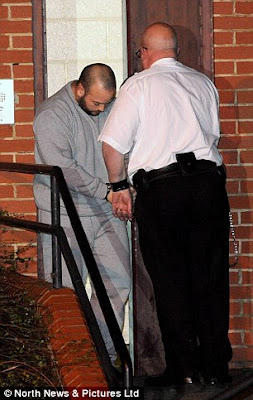 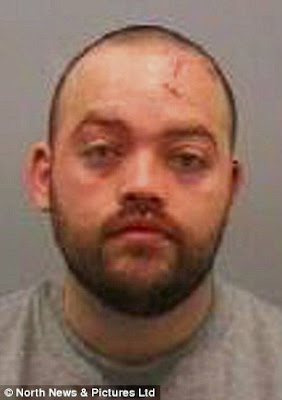 Ruddy had been begging his parents for money before he launched his attack and had already been handed £4,000, but still had more than £5,000 in debt.

Prosecutor John Elvidge QC said Ruddy’s life was ‘running out of control’ around the time of the killings, and that his marriage was also on the verge of breaking down. The court was told that Ruddy’s behaviour had been ‘erratic’, and he had been prescribed anti-depressants by his doctor after falsely claiming his father had died.
On the day of the murders Ruddy claimed he went shopping with his mother in Asda before going back to her house to watch an Olly Murs programme on TV. He had claimed that during the programme there was a knock at the door which his father went to answer, and that two men broke in before knocking him unconscious.

He said he awoke to find both of them dead, before going to a neighbour’s house with a pair of scissors sticking out of his shoulder to ask for help.

During Ruddy’s trial, Newcastle Crown Court heard that Mrs Ruddy had managed to utter the words ‘please, can you hurry up’ before her son ended the call and strangled his mother with a wire cord.
But a BT spokesman told the court that Mrs Ruddy’s words were indistinguishable, and there was no sign of distress during the call so it was not passed on to police.
She added that police forces have asked that inaudible calls are not forwarded to them and insisted the operator ‘followed the call-handling process’. The spokesman said: ‘I can confirm that a three-second 999 call was received by a BT operator.
‘There were no signs of disturbance or distress and although a muffled, unclear voice can be briefly heard on the recording, what was said was unfortunately indistinguishable.
‘Following the process agreed with the police, the operator remained on the line after the handset was replaced for a further 45 seconds before then ending the call as the handset is not picked up again.
‘Police forces have requested that we do not connect such calls to them and our operator correctly followed the call-handling process.’
Ruddy had drugged the pair before launching his attack, then lied to police, saying they had been killed during a violent burglary.
To make his story seem more plausible, Ruddy cut his father’s face with a serrated knife as he lay dying, then stabbed himself in the chest and shoulder with nail scissors.
Officers were not sent to the address until more than an hour later after Ruddy returned home with a neighbour who called an ambulance, but the couple were pronounced dead at the scene.
The court heard during the trial that Mrs Ruddy’s voice was unclear and audio experts had to use specialised equipment to decipher her words.
Northumbria Police confirmed the 999 call had not been put through to them.
‘The call was made to the 999 BT Exchange which is based in the south of England.
‘However, the call was not put through to emergency services in the North East area and Northumbria Police did not receive the call.’
In fact Judge Paul Sloan QC said Ruddy had gone to the family home with the intention of extracting more money from his parents, who had refused.
Former bin man Eric Ruddy suffered blunt force trauma to the head, and had also been cut with a knife or knives,while his wife Carol, an ex Newcastle University employee, had two bruised lines around her neck from ligature strangulation.
At the time of the deaths, Mrs Martin had £342 in her bank account, while her husband had £87,019. Ruddy stood to inherit everything if they both died.
After murdering his parents, he staged a burglary, trashed the house, attacked himself with a brick and nail scissors and tried to pin the blame on intruders.
However, a jury rejected his account and convicted him of murder last week.
The 29-year-old was jailed for life with a minimum term of 35 years.
Source: UK Daily Mail
Related Topics:
Up Next

Unbelievable! No one was killed or injured after car smashes through roof of a house (photos)