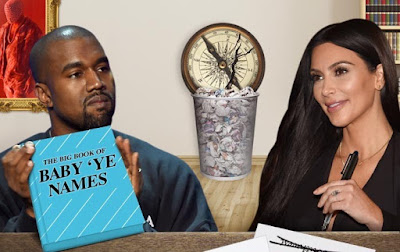 They may have named their first child North West – but nah, their 2nd child won’t be named South or East West..lol..as it’s been revealed that their choice of next baby name won’t be inspired by direction.

Kim Kardashian and Kanye West are ditching the compass when it comes to naming baby #2 … we’ve learned there will be no sequel to North West.

Sources close to the couple tell us there’s no chance their new bundle will be inspired by direction, like their firstborn. Everyone’s been speculating they’d go with something like South, East or even Easton — but we’re told there’s simply no direction in play.

The main reason, we’re told … is they want the name to be strong. With North, there was a power element because it’s always on top, or pointing up. The other 3 just don’t have that swagger.
Our sources say right now they’re leaning toward something more traditional … with a family-related influence. Think less ‘K’ name … and more likely something connected to Kim or Kanye’s late parents, we’re told.

Kim’s due in December, so they’ve got time to sort it out. Perhaps they’ll even go seasonal … Winter West has a nice ring to it, but no word on the s3x yet.

Related Topics:ByDirection lolKim & Kanye's 2nd Baby's Name Will Not Be Inspired
Up Next