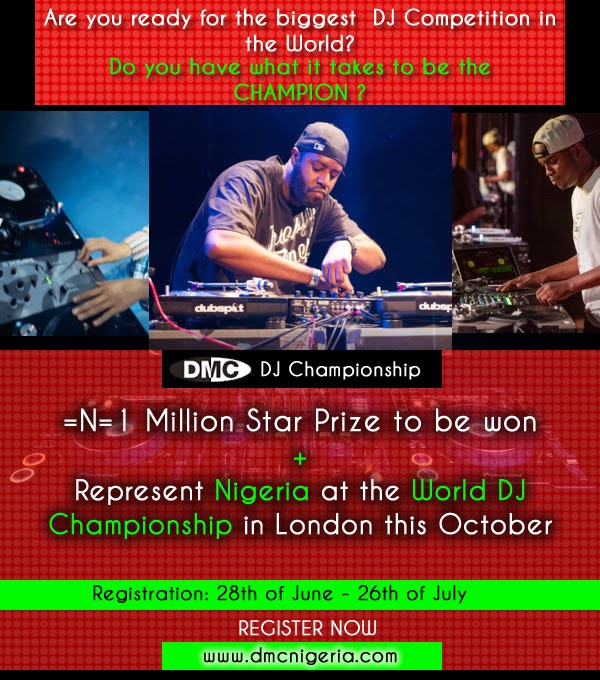 DMC WORLD DJ CHAMPIONSHIP is the BIGGEST disk jockey competition in the WORLD.
The Championship started almost thirty years ago in London and has become the dream of every DJ in the world to participate at the DMC world championship. Every year, DJ’s from all over the world including USA, Japan, France, Italy, Germany, Australia, China, Spain, Thailand, Singapore, Hong Kong, Brazil etc send their representatives to represent their countries at the championship where the winner walks away with prizes worth a million dollars.
In recent times only South Africa and lately Kenya, has had the privilege to send a representative from the whole of Africa. It’s a pleasure to announce that Nigeria has finally been given the right to host a DMC championship of which the winner will win One Million Naira and represent Nigeria, for the first time at the world championship in the UK in October. This is certainly one of the biggest things to happen in the entertainment industry in recent times.
Registration has started and its free. Registration will run through the month of July. To register, kindly visit the website DMC Nigeria DMC DJ CHAMPIONSHIP, NIGERIA promises to be a blast as we search for the next superstar DJ in Nigeria. To achieve this, 8 of the best DJ’s from all over the country will be gotten after major auditions from three (3) Zones around the country (Lagos, Abuja and Porthacourt)and will be made to compete under an intense atmosphere that will be filled with drama, dexterity, fun and unending possibilities. At the grand finale, which will be in Lagos, every stage will see one contestant eliminated until the last stage where the last 3 will battle for the crown.
After the zonal championship, a lot more buzz will be created by having the contestants storm University campuses and clubs to showcase their skills. The Judges for the competition will be led by DJ Jimmy Jatt .
Related Topics:BIGGEST disk jockey competitionDMC WORLD DJ CHAMPIONSHIP
Up Next