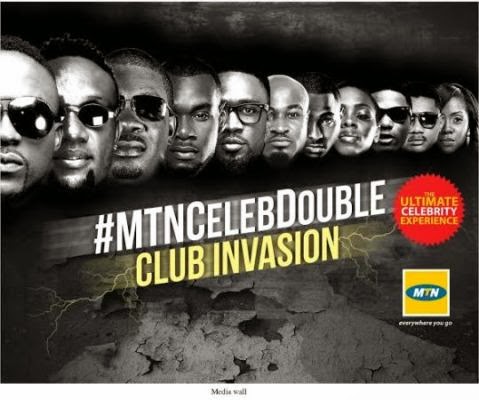 When the #MTNCelebdouble was launched a fortnight ago, the social media via Twitter, Facebook and Instagram was abuzz with pictures and commentaries from those who felt they looked like any of the telecommunications company’s ambassadors. It was certain that Nigerian music fans will be ushered into the long coveted celebrity experience on a platter of gold.  Therefore, it was no surprise to see fans that look almost exactly like Tiwa Savage, Davido, Wizkid, Iyanya, Don Jazzy, D’Prince, iMike, Kcee, Harrysong, Praiz and Chidinma posting their images on MTN Twitter, Facebook and Instagram accounts. Continue…

Having found the celebrities close splitting images, the expectations of the MTN ambassadors’ fans will come true tonight. The ambassadors will be sharing special moments with their ‘doubles’ in different parts of the country live from 8pm in Lagos, Benin and Enugu, where Invasion Parties, at choice clubs, have been specially organised for the look-alikes and fans.

D’Place on Adeola Odeku, in Lagos, will be a haven of fun and music, asides opportunities to share in the ‘good to better’ and celebrities’ experience. The same goes for Villa Toscana in Enugu and Club Joker, located within GRA, in Benin.
All the celebrities will be fairly distributed across the clubs. Don Jazzy, who will be part of the parties, has said ‘it is more than a party, it is a real night out with fans and my real look-alikes’.  Also Tiwa Savage, who had earlier spoken about her excitement at meeting her real ‘doubles’, said it’s going to be a time to flex and share ‘great moments with Nigerian youth in a boundless and free atmosphere, which clubs are known for.

Meanwhile the look-alikes will spend the better part of the day reeling in an extensive VIP treat. They have already been checked into 5-star hotels where they will spend the weekend. A special tour has been arranged for them to see parks, museums and many exclusive places. They will also be having a group lunch with their celebrity ‘doubles’ before rounding off with a memorable party-time amidst pomp and fun-fair in the company of the ambassadors and other fans.