Home News Feed According to MTO, Rihanna is pregnant for…. either Chris Brown or Drake
Facebook
Twitter
WhatsApp MediaTakeOut and some of their stories…lol. According to the gossip site, Rihanna is expecting a baby for either ex-boyfriend Chris Brown (who she broke up with in April 2013) or current boyfriend Drake and they even have a baby bump to prove Rihanna’s pregnant. Choi! Find their report below…

MediaTakeOut.com just received a stunning report – people close to Rihanna believe that she’s PREGNANT – and they have good reason to.

First off, MediaTakeOut.com can confirm that Rihanna has given up cigarettes and weed in recent weeks. And for anyone that knows Rih . . . she constantly has a blunt or a cigarette in her mouth, so this is very surprising. 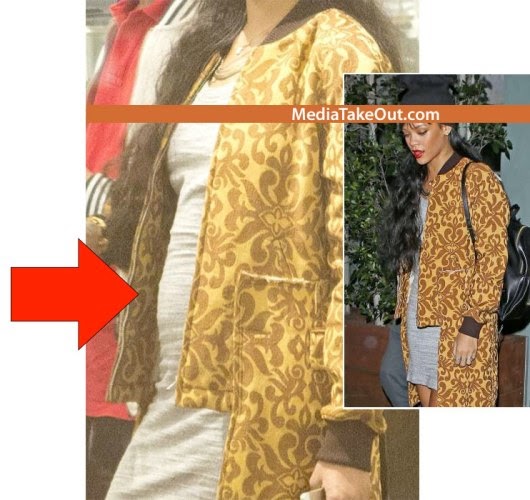 But what’s even MORE surprising is that Rihanna has given up drinking too. According to our SNITCH inside Rih’s camp, the Bajan BEAUTY refused to attend the official AFTERPARTY on Drake’s tour because there would be “too much alcohol and weed smoke” there. So Rihanna went back to the hotel room instead.

And now the PICS. Yesterday MediaTakeOut.com showed you guys pics of Rihanna – getting DECAFFINATED TEA with her father. Well look at her stomach area.

The most INTERESTING part of the story – is assuming Rihanna IS PREGNANT – whose baby is it? While it seems like it SHOULD be Drake’s . . . we can tell you with 100% FACTS that Rihanna visited Chris Brown while he was in rehab. And y’all already KNOW what Chris was doing in rehab . . . that’s how he got himself LOCKED UP!!!