Home National News Odd News World’s most expensive necklace(£34million) was found in a dirt lump by a...
Facebook
Twitter
WhatsApp

The world’s most expensive necklace, L’Incomparable has gone onsale for £34million( 8.7 billion naira)The interesting thing is, the center piece was found in a dirt lump by a poverty-stricken African girl.

The flawless yellow gem has more than 407 carats.

L’Incomparable was found in its rough state weighing 890 carats by a poverty-striken African girl as she played in a pile of rubble outside her uncle’s house in the town of Mbuji Mayi in the Democratic Republic of Congo.

When the girl’s uncle saw the lump, he was convinced it was of value and sold it to local African diamond dealers for an unknown sum.The dealers, in turn, sold it to a group of Lebanese buyers operating from Kinshasa, Kenya.

Guinness named it the world’s most valuable necklace in 2013

It was created by luxury jeweller Mouawad and is being offered for sale at a Singapore jewellery show.

Only serious potential buyers will get the chance to try it on.

For the L’Incomparable is protected by an army of security guards, plain-clothed supervisors, cameras, and motion detectors. 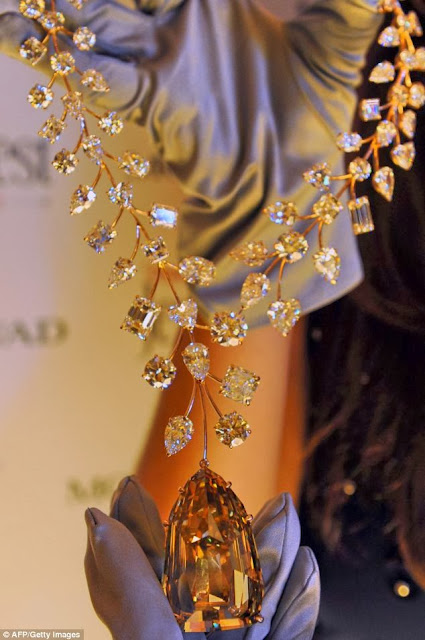 One thing is certain, the child who found it in the 1980s will never benefit. Her identity and fate remains a mystery.