Jubilation has continued to greet the decision of the federal government to create  a N3bn grant for the entertainment industry sub-sector, despite expression of fear by some stakeholders over the accessibility of the grant.

Last Saturday,  President Goodluck Jonathan announced a N3 bn grant to support the nation’s motion picture  industry. He also launched a programme known as “Project Nollywood,”  which he said will help  to support the key components of the industry’s value chain through a dedicated grant.

The President made the announcement at a dinner he held with top Nollywood practitioners in Lagos, to celebrate Nollywood’s 20th anniversary and to compensate for the problems that practitioners encounter while attempting to access the loan-styled $200m facility the Federal Government announced for the industry in 2011. 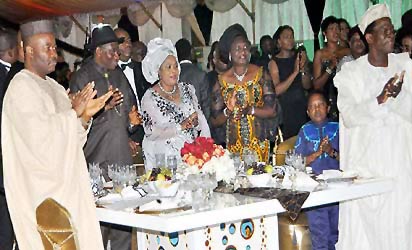 Ever since then, the industry has been thrown into wide jubilation, but not without  caution from some quarters.

Commenting on the grant, the president of Actors Guild of Nigeria, AGN, Miss Ibinabo Fiberesima described it as “a new beginning for the industry.” According to her, the grant remains a plus to Nollywood.

“ We cannot but say thank you, Mr. President. This is one President that has given ear to our yearnings.  He has identify with Nollywood, for me it’s a plus. This will help to take us to the next level,” Ibinabo said.

However, Ibianbo  said, the practitioners are yet to be acquainted in respect of how to access  the fund. For  Charles Novia, the gesture is  welcome development. “ President Goodluck Jonathan has shown consistency in supporting the movie industry  over the years and that should be commended.

The grant will help the industry redirect creative and entrepreneurial energies to the next level. I only hope that it would not be mis-directed to other personal interests but expediently utilised for the purpose which Mr. President set it up.”

Novia however, advocated the need for the grant to be given to industry players based on merit and additional criteria of integrity and body of impressive work done as well as potentials of the project.

Speaking in the same vein, president of Association of Nollywood Core Producers, ANCOP, Mr. Alex Eyengho posited that funding is not the major problem of the industry, but lack of proper umbrella structure for the industry.  He said unless and until the Motion Picture Practitioners Council is put in place, a hundred billion dollars pumped into the industry will go down the drain.

“ President Jonathan should sponsor the MOPPCON bill as an Executive bill at the national Assembly and ensure its passage into law.” That is what we need in Nollywood and not dinner,” Eyengho stated.

Meanwhile, Mr. President while in his address, reiterated his administration resolve to continue to give Nollywood every support and assistance to take the Nigerian movie industry to greater heights of success.

“Encouraged by the feedback we have received from you on our administration’s support for Nollywood, we have further designed a programme known as Project Nollywood to support the key components of the industry’s value chain through a dedicated grant totaling N3bn.

It will include capacity development fund and funds to support the industry’s infrastructure. The scheme, which will be launched in the first week of April, will be managed by the Ministry of Finance in collaboration with the Ministry of Culture and Tourism.”

Yet, it was a twin-booty for the industry as Akwa Ibom State Governor, Godswill Akpabio, also tickled the gathering by endowing the ‘Goodluck Jonathan Prize for Best Producer, Actor and Actresses’, worth N50m.