The Popularly known,energetic, Charismatic Singer and entrepreneur Banky W covers the hot new edition of Y! Magazine – the ‘Power to the People’ issue that profiles the energy, passions, and activism of young Nigerians over the past few months.

EXCERPT FROM CONTENT READS THUS:
“Across the world, the balance of power has turned over,” said Chude Jideonwo, _Y!_ Magazine’s Editor-in-Chief. “Beyond the Arab Spring, the Libyan revolution and Occupy Wall Street and the way that young people every from Europe to Malawi are driving the conversation, what anyone who is paying attention will notice is that power has truly changed hands – people movements and pop culture have begun to play an even
greater role than politicians and government, and those are the kinds of issues that _Y!_ chronicles.”In the cover interview, Banky W speaks exclusively and candidly about his battle against cancer, his activism, and entrepreneurship in Nigeria.

“When I was about to be operated on by a doctor, he cancelled while I
was right there on the operating table, because he was nervous about how
far it had spread and if he was expert enough to deal with it,” Banky W
recalls in the cover story. “I think that’s when it set in on how
serious it was, because we then had to go from one referral to another
trying to find the specialist who could operate on thisparticular strain
of cancerous tumours. It was arguably the scariest time of my life.” 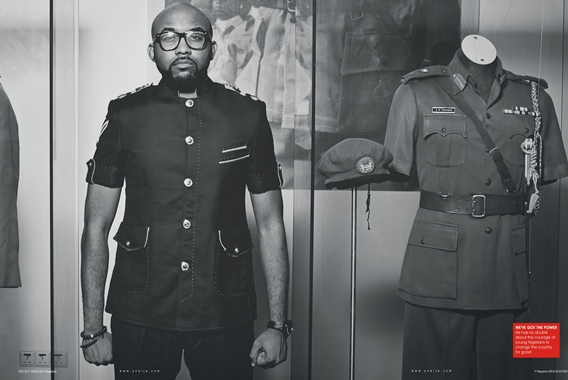 Photos: winner of the 2012 ‘I Am Victorious Supermodel Contest’ revealed