One of the known craziest musical Gods as she is always known. A very daring celeb when it comes to fashion and looks.

Something strange happened when she  attended the L.A. Pride 2012 festival in West Hollywood, it was her appearance that was the disaster of the day as she appeared having a look that got the media scared. Lil Kim showed off a drastically different-looking face when she took to the stage to perform during L.A. Pride. Experts say it is a case of plastic surgery gone wrong.

“It looks as though her lower lip on the left side is not working well,” the plastic surgeon told RadarOnline.com. “It looks like her lips are thinner than before. It’s possible that she had a lip reduction performed.”

Daily mail lamented by saying: “Her cheeks appeared extremely puffy, suggesting she has had cheek implants, and the result made her face appear much rounder. Curiously Kim’s lips looked considerably smaller than they have in the past,”

Back in March, the Orange County Register commented on Lil Kim’s face, noting that plastic surgery could be behind her changing looks. 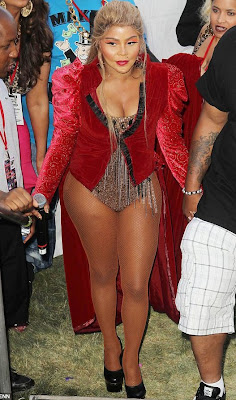